With its complex history, soaring skyscrapers and centuries-old temples, this tour has something for everyone. From bustling cities to stunning countryside and UNESCO world heritage-listed national forests. It is a tour full of contrasts. 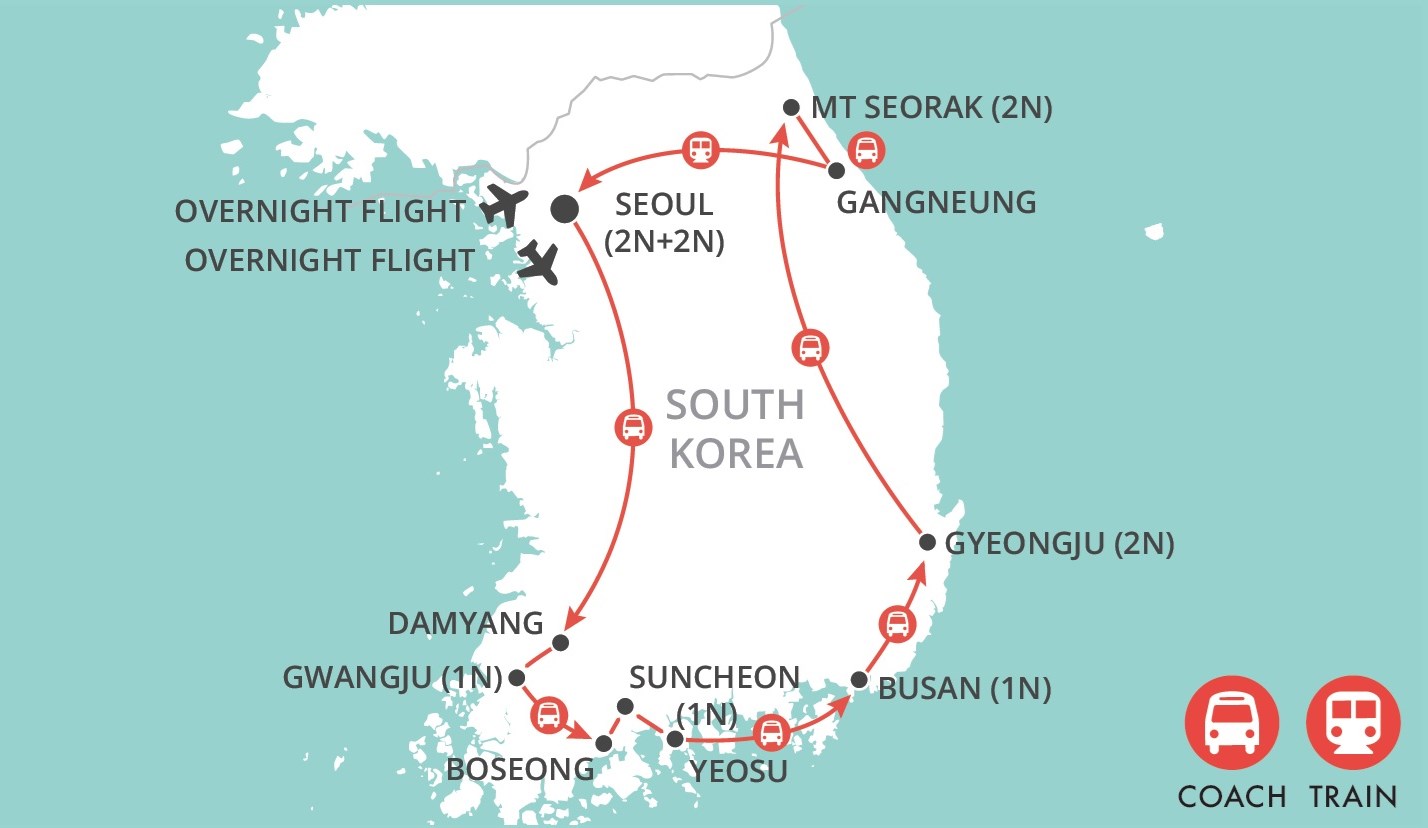 Fly overnight to Seoul, the dazzling capital city of South Korea. Depending on your time of arrival, the rest of the day is yours to start soaking up the local culture. This evening meet your National Escort and fellow travellers to enjoy dinner at a local restaurant.

A dynamic, 24-hour city, amongst the skyscrapers and nightlife districts of Seoul there is an exceptional amount of culture and tradition. Start your explorations at the immense Gyeongbok Palace, which will include the changing of the guard ceremony, before exploring the National Folk Museum. Learn to cook a delicious Korean classic in a cookery class – you’ll get to eat it for lunch – before strolling Insadong Antique Alley and visiting UNESCO-listed Jongmyo Royal Shrine. End the day with panoramic views over the city at the N Seoul Tower. 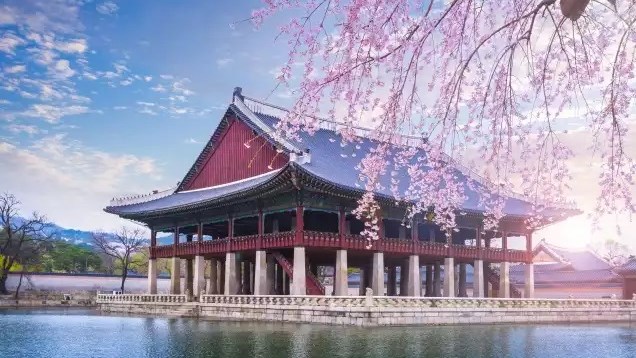 Head to Boseong, considered the best place in Korea to grow tea, and visit a green tea plantation, learning all about its production and enjoying a tasting. Continue to Suncheon for a stop at the 6th-century Seonamsa Temple. A UNESCO World Heritage Site, the temple grounds are also home to a beautiful arched stone bridge. Also visit Naganeupseong Fortress Village for a glimpse at a more traditional Korean lifestyle and a chance to take part in a handkerchief dyeing experience.

Head to Yeosu and ride the cable car over beautiful scenery and open water to Dolsan Island. Continue to Odongdo Island for more spectacular landscapes and take some time to appreciate the array of wild flowers that flourish here before travelling to the port city of Busan.

The laidback to Seoul’s bustle, Busan is a city full of character and traditional features as well as mountains, beaches, temples and exquisite seafood. Start the day with a city overview from the top of Busan Tower, before browsing the wares at Kukje Market and Jagalchi Fish Market. Walk over the Oryukdo Skywalk, a glass bridge set on a seaside cliff, soak up the peaceful nature of Dongbaekseom Island, and feel the sand between your toes on Haeundae Beach. Drive to Gyeongju.

A city of cultural and historical relics, Gyeongju is called ‘the museum without walls’. Capital of the Silla Kingdom for over 1,000 years the city is home to a staggering number of tombs, temples, statues and ruins, some of which you’ll explore today. Begin at the Gyeongju National Museum before visiting Tumuli Park, a collection of royal tombs, and Anapji Pond. Then head just out of the city to the magnificent UNESCO World Heritage Bulguksa Temple, considered the pinnacle of Silla architecture, and Seokguram Grotto.

Travel to Sokcho stopping en route to explore the 1,300-year history of the Naksansa Temple, a seven-storey stone building overlooking the East Sea.

Mount Seorak National Park is a spectacularly scenic area of high, cloudy peaks, craggy bluffs and fragrant pine forest. Designated a UNESCO Biosphere Reserve as a habitat for many rare species of plants and animals, it is one of South Korea’s most dramatic natural treasures. Enjoy a short, easy hike along a beautiful valley and see the mountaintop Gwongeumseong Fortress by cable car.

Transfer to Gangneung and board a highspeed train bound for Seoul. On arrival, after lunch, there will be free time before a non-verbal performance of ‘Nanta’, an award-winning show which incorporates the traditional Samulnori rhythm.

Created as a buffer zone between North Korea and South Korea at the end of the Korean War, the DMZ is part of the most heavily militarised border in the world. Your visit will include the Bridge of Freedom, DMZ Theatre & Exhibition Hall and the 3rd Infiltration Tunnel. Return to Seoul to stroll through the huge Gwangjang Market. Enjoy a farewell dinner. Special conditions apply to this day, please refer to your tour dossier for more information. 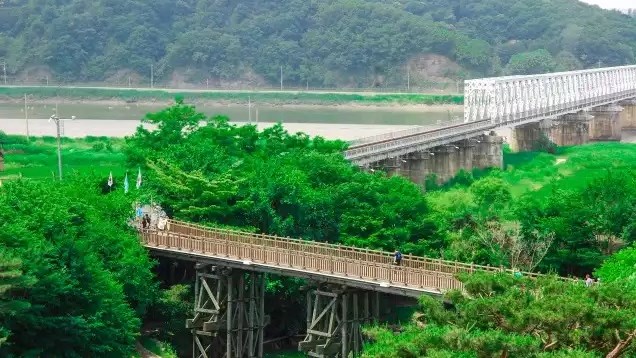 This morning is free at leisure before you transfer to the airport for your return flight home.

Enquire Now
*Terms and Conditions: Offer valid 3-31 March 2021 on selected flight-inclusive and land only group tours to China, East Asia, South East Asia, India, Sri Lanka, Middle East and Central Asia. Not available in conjunction with any offer other than Loyalty Discount. New bookings only. Subject to availability. Prices based on twin share. Advertised prices include savings. Prices based on Economy Class fare by Singapore Airlines, Cathay Pacific, Emirates and Malaysia Airlines at time of advertising and may be higher subject to capacity of tour and desired booking class, valid for departures from SYD, MEL, BNE, ADL and PER based on airlines’ operating services. Domestic connection within Australia, or extra nights’ accommodation may be required at an additional expense. A non-refundable deposit of $99pp is to arrive at Wendy Wu Tours or your travel agent within three days of receiving confirmation that space has been held for you. A second deposit is required 90 days before departure when the tour is designed to use Cathay Pacific ($1000/pp) or Emirates ($2500/pp) which will be advised at time of booking. Final balance due 75 days prior to departure. One complimentary date change permitted up to 75 days before departure. Bookings are not transferrable. In the event your tour departure is deferred due to unforeseen circumstances such as government travel restrictions, deposits will be placed as future travel credit with rebooking fees waived. Balance paid 75 days prior to departure is fully refundable, excepting that should air tickets have been issued, will be placed under individual airline’s waiver policy at time of cancellation. Standard policy applies to voluntary changes and/or cancellation. Contact your travel agent for more information. SUPPLIER: Wendy Wu Tours