Waterways of the Tsars

See the swirling onion domes and stout towers of Moscow’s Red Square. Share stories at the kitchen table of an Uglich family. Savor Russian caviar with your blini pancakes. Soak up the steam in a traditional banya in riverside Mandrogy village. Envision Peter the Great luxuriating in massive Peterhof Palace, then see how multiple families shared living space at a Soviet-era kommunalka. From Moscow to St. Petersburg, this 13-day voyage reveals the real Russia as never before.

Talk to an agent 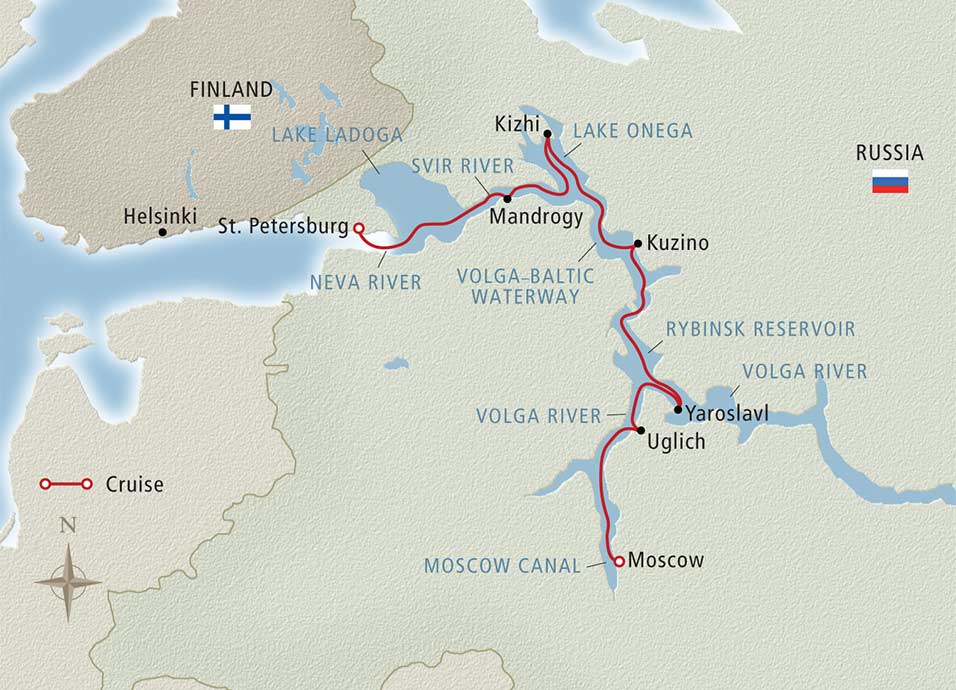 Day 2: Moscow, Russia
The immense scale of Moscow, a major cultural and economic metropolis as well as Russia’s pulsing political center, is breathtaking.

Day 3: Moscow, Russia
Majestic Moscow, one of the world’s greenest cities, decorates even its subway stations lavishly with art and magnificent chandeliers.

Day 5: Uglich, Russia
Founded in 1148 along the Volga River, Uglich is a magnificent city to behold from the river.

Day 6: Yaroslavl, Russia
Stretching 18 miles along both banks of the Volga amidst a region of forests, Yaroslavl was founded in 1010 by Prince Yaroslav the Wise of Kiev.

Day 8: Kizhi, Russia
Situated at the north end of Lake Onega, Kizhi Island is home to the famed Open Air Museum of Architecture.

Day 10: St. Petersburg, Russia
Russia’s second largest city, St. Petersburg has been called “Venice of the North” for its many islands, canals and bridges.

*Terms and conditions apply: Pricing correct as of 02 July 2020. Price based on October 10 2020. Once you have paid the deposit for your trip, you are safe from any additional charges. Currency fluctuations, increased fuel surcharges, new government taxes—none of these will apply to you. Prices listed are in Australian dollars, per person, based on double occupancy. All fares and offers are for new bookings only as of 01 May 2020. Book by 31 July 2020 to qualify. Prices include port charges and all gratuities. Viking River Cruises reserves the right to correct or revise pricing or dates throughout the season. Conditions apply. Price listed above are subject to seasonality and availability, and may change without prior notice. Cruise fares listed are cruise only in Australian dollars, per person, based on double occupancy. Cruise fares listed are valid for Australian and New Zealand residents only. Cruise ship fuel surcharge may apply. All fares and offers are for new bookings only as of 01 May 2020, are subject to availability, may not be combinable with other offers except Past Guest Travel Credit and Referral Rewards Credit, are capacity-controlled and may be withdrawn at any time without prior notice. Cruise fares do not include pre-paid charges, optional facilities and service fees, and personal charges, as defined in the terms and conditions of the Passenger Ticket Contract which may be viewed elsewhere on this website. Full brochure fares may not have resulted in actual sales in all stateroom categories and may not have been in effect during the last 90 days. Promotional fares may remain in effect after the expiration date. Viking reserves the right to correct errors or omissions and to change any and all fares, fees and surcharges at any time. For up-to-date prices, please call Viking or your travel agent. The cruise ship fuel surcharge is additional revenue to Viking River Cruises, as are any additional charges relating to currency fluctuation other than for fully paid cruise fares and full fares, which fluctuations are beyond our control. Additional terms and conditions may apply. Complete terms and conditions may be found in the Passenger Ticket Contract.