In 12 days this solo traveller tour of north India reveals many its most famous sights and fairy-tale like palaces of Rajasthan. Explore Delhi, visiting the grand Jama Masjid and the spice market, then travel to Agra visiting the pristine white embodiment of eternal love, the magnificent Taj Mahal. Visit colorful Rajasthan, arriving at the Pink City Jaipur to see fascinating bazaars selling textiles, blue pottery and local handicrafts. Witness the Mehrangarh fort atop a steep hill towering over opulent palaces and colorful bazaars in Jodhpur. This tour epitomises the romance and mystical aura of Intriguing India. 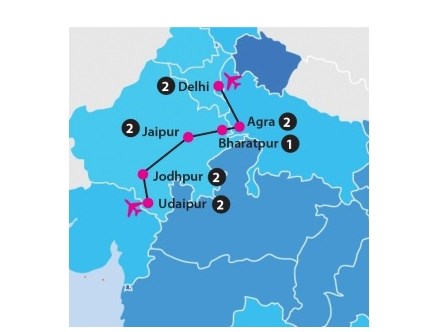 Welcome to India! Upon your arrival at the airport, your Tour Director will meet you at the arrival lounge holding a placard. Thereafter he will assist with transfer and check-in at the pre-booked hotel. Stay for two nights in Delhi. (No Meals)

After leisurely breakfast transferred to board a flight to Delhi and drive to Agra, home to India's most famous landmark, the Taj Mahal. A poem of white marble, the Taj is described as the most extravagant monument ever built for love. Check in to your hotel and later around 5 pm we visit an Indian family for an interactive cooking session with home cooked food. This is not a cooking class with a professional chef, rather it is a chance to visit an Indian home for insights into their daily life and an introduction to a very tasty regional cuisine by the lady of the house. (B, D)

Early morning visit Taj Mahal, the epitome of love, standing on the banks of the river Yamuna and built in the 17th century by the Mughal Emperor Shahjahan. The white marble building changes its hue with the variations in daylight. Made entirely of white marble and decorated with exquisite pietra dura work, different types of precious and semi-precious stones were used in the intricate inlay work done on the interiors. This magnificent monument is built on traditional architecture style ’four gardens’ plan, split by watercourses, and reflects the influence of Persian architecture. After breakfast visit, Agra Fort, built by Emperor Akbar, which is a mixture of the Islamic and Hindu styles of architecture and Itimad-Ud-Daulah Tomb, nicknamed the baby Taj; another fine example of Mughal architecture. (B, D)

After breakfast check out from the hotel and drive to Bharatpur, famous for Keoladeo Ghana National Park – a UNESCO World Heritage Site, in all the way a paradise for ornithologists. Arrive Bharatpur and check-in at the hotel. EveningvisitKeoladeo Ghana National Park, a 29sq km UNESCO World Heritage Site by cycle rickshaw. The Keoladeo Ghana National Park declared a World Heritage site, is arguably India's most spectacular bird sanctuary. Each year before the arrival of winter, thousands of birds migrate from the frozen waters of Siberia, Tibet, Mongolia and Eastern Europe to India.  One of the best destinations for these birds is the marsh of Bharatpur, which lies between Agra and Jaipur in the north-western part of India.  The reserve derives its name (Keoladeo) from a temple devoted to Lord Shiva which is situated in the park. Stay overnight in Bharatpur. (B, D)

After breakfast travel to Jaipur, en-route visit Abhaneri Stepwell, an ancient village in Rajasthan is renowned for its post-Gupta or early medieval monuments, Chand Baori – one of the largest step wells in India, which dated back to 10th century. Rest of the day free to relax or explore local Bazaar. Stay two nights in Jaipur. (B, D)

After breakfast proceed for guided sightseeing of Jaipur and visit the Amber Fort with a photo stop at Hawa Mahal, City Palace Museum and the Jantar Mantar a complex of astronomical instruments, chiselled out of stone which provides fairly accurate information to this day. Women will have their hands designed by Henna Artists and men will learn the traditional Rajasthani Turban tying, there are many variations of the turbans in Rajasthan, and it is said that the style of the turban changes with every 15 km you travel. Stay overnight in Jaipur. (B, D)

Today you will experience the feeling of travelling back in time with a journey to Jodhpur, while you catch a glimpse of the magnificence ancient desert city built on the edge of the Thar Desert.The evening is free to stroll the local bazaars famous for textiles, embroidered leather shoes, lacquerware, antiques, carpets and classic silver jewelry. Stay for two nights in Jodhpur. (B, D)

Visit Mehrangarh Fort built by Rao Jodha in 1459; one of the largest forts in India, the beauty and grandeur of numerous palaces inside narrates a saga of hard sandstones yielding to the chisels of skilled Jodhpuri sculptures. Afternoon free to relax or explore the local bazaar. (B, D) 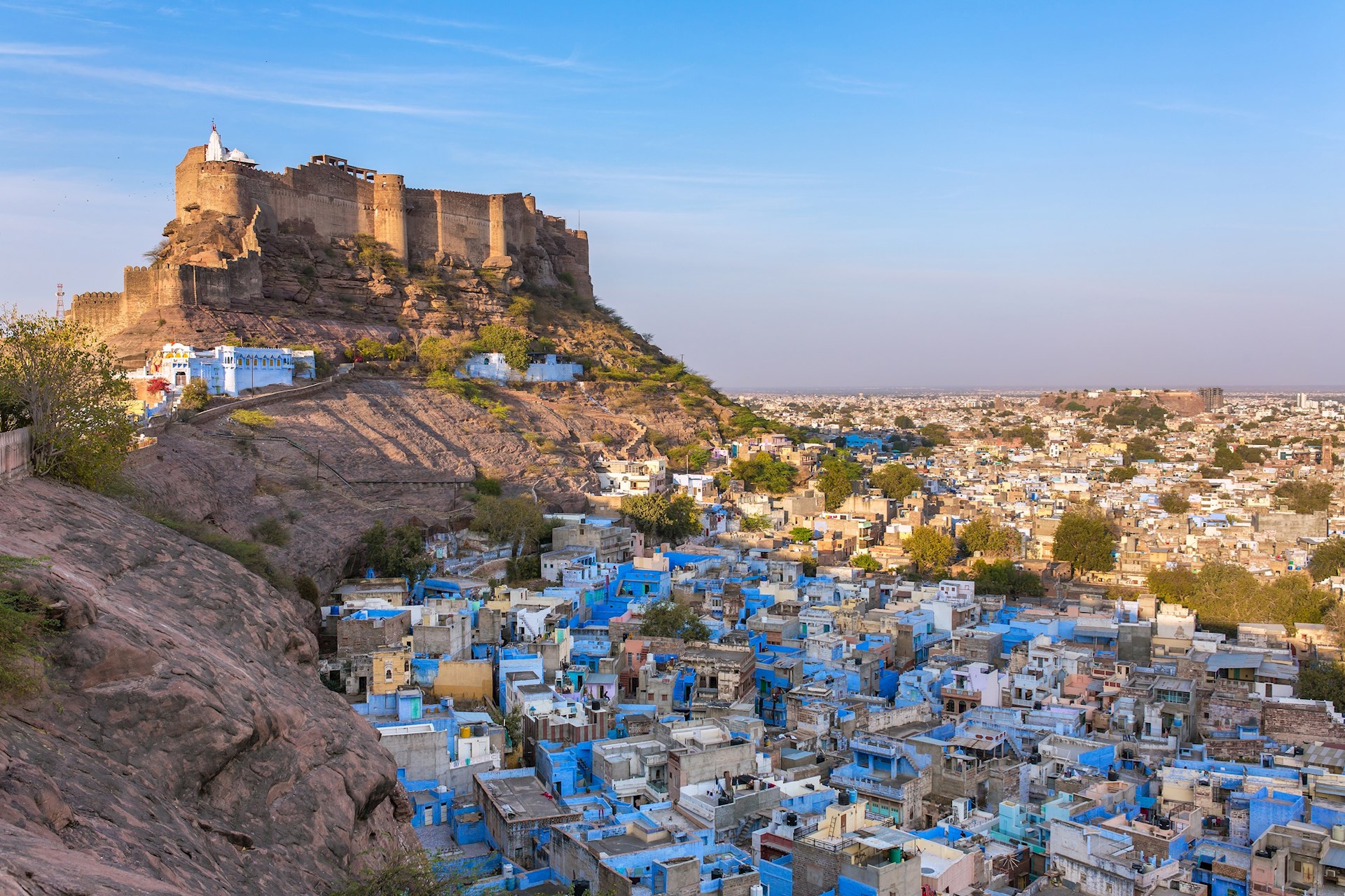 After breakfast travel towards the lake city of Udaipur, En-route visit  Ranakpur, with intricately carved marble Pillars and Domes. Tucked away in a remote valley in the Aravalli ranges and one of the most important Jain Temples in the country. Two nights in Udaipur. (B, D)

Start a day with a walking tour of Trible Village to experience the lifestyle of locals. Later visit City Palace one of the most famous architectural marvels of the city and Crystal Gallery and conclude your day with a boat ride on Lake Pichola. (B, D)

After breakfast check out by 1200hrs. The tour finishes with wonderful memories and direct transfer to Udaipur airport to board flight for onward destination. (B)

Contact Us
*Terms and Conditions: Valid for new bookings only. Valid for travel in 2020. Prices, offers and inclusions are strictly subject to availability and can change at any time, without notice. Booking, payment and cancellation conditions apply. Contact your travel agent for full details. SUPPLIER: Total Holiday Options